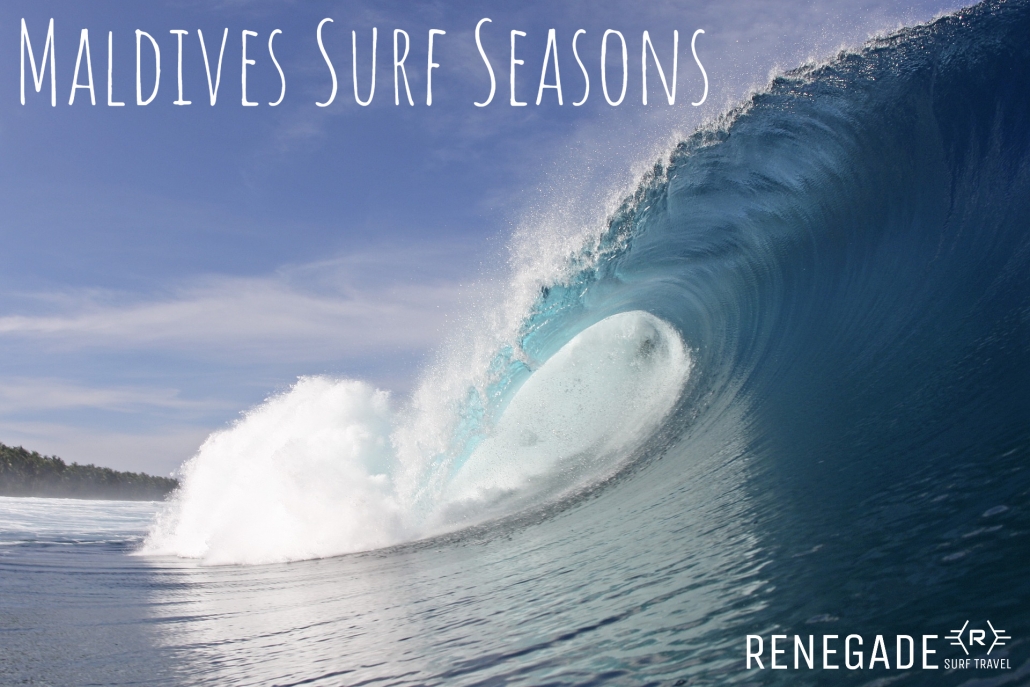 The Maldives is one of the most consistent surf zones on the planet.
Sitting plum in the middle of the Indian Ocean, the Maldives are open to all swells. Despite their diminutive land mass, the Maldivian atolls stretch over 800km from North to South. As a result, the Maldives surf season covers two distinct monsoon patterns making it a year round surf destination.

There are 3 main surf zones in the Maldives: the Malé Atolls, the Central Atolls and the Southern Atolls. These regions all have a slightly different characteristics and therefore work best at different times throughout the year. In this post we will break down typical conditions across the Maldives Surf Season to help you decide when to go and what to expect during your next surf trip in paradise. 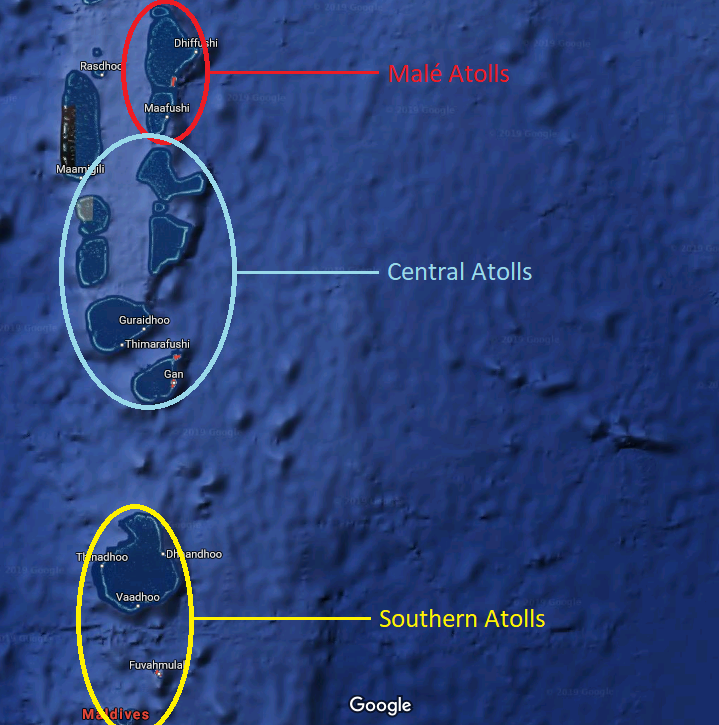 The Malé Atolls are the most northerly and accessible of the 3 zones and therefore the most commonly surfed. They can be split into North Malé and South Malé. The former being more popular due to more swell exposure, an abundance of consistent, quality reefbreaks and close proximity to Velana International Airport. Despite this, with your surf guide’s knowledge, it’s still possible to surf perfect waves with just our crew out.

The Malé Atolls have the smallest swell window of the 3 regions as SW swells are blocked by the central atolls. Luckily, the SE swells that are common from April through to October are some of the most consistent in the world. If you’ve been to Indo in the dry season you’ll be familiar with the SE trade winds that blow day in day out. These same winds blow over the Indian Ocean, whipping up fun sized mid period swells all day, every day. When these swells arrive in the Maldives, they are greeted by offshore trade-winds which groom them to perfection. 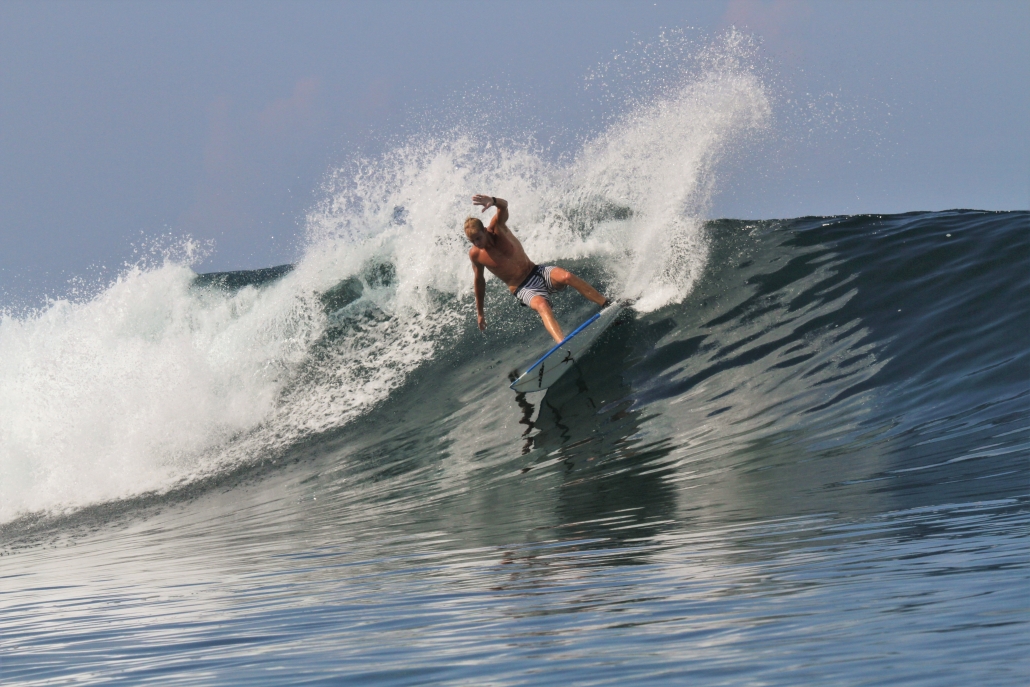 An overnight cruise South and we enter the Central Atolls. Famed for uncrowded lineups with perfect waves peeling around quintessential tropical islands. The Central Atolls are a sight to behold for any surfer. With the Southern Atolls far enough away not to block SW swells, the Central Atolls are open to more swell directions than the Malé Atolls. The same long period SW groundswells that smash into Indonesia wrap in here with less power, making it an intermediate’s paradise (don’t worry though, there are plenty of hollow and powerful waves on offer too). The central atolls sit in the doldrums just north of the equator so slack winds and glassy conditions are a common occurrence – especially in the shoulder seasons.

All of our Surf Coaching Trips cover both the Malé & Central Atolls regions for a reason – across these two super consistent regions we can nearly always find great quality, uncrowded surf! 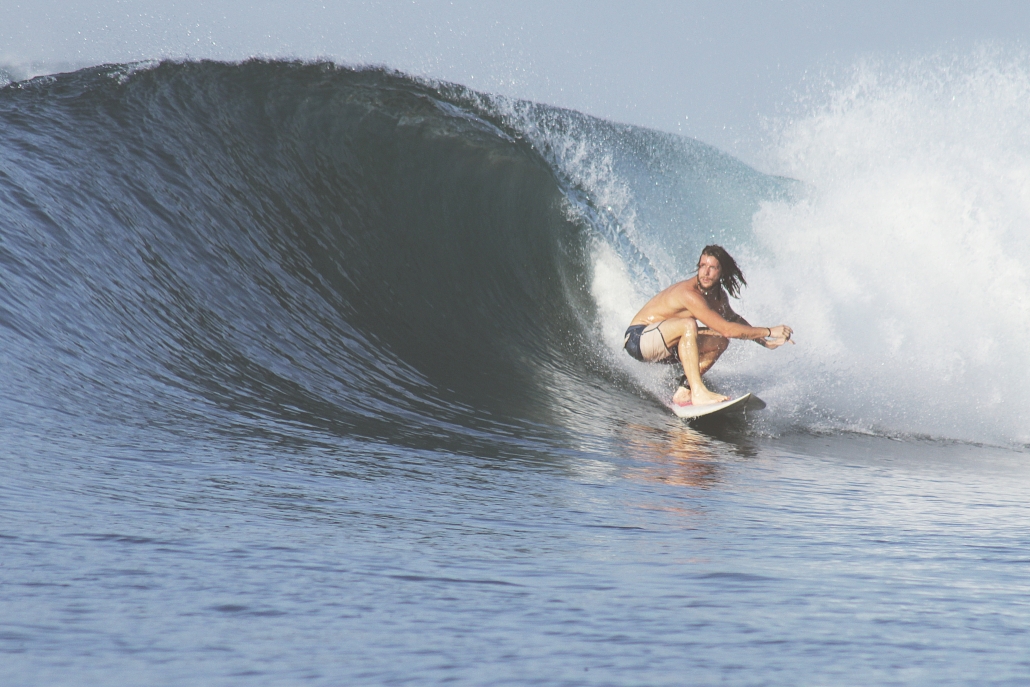 The further south you travel the more remote the surfing experience becomes. The Southern Atolls are the Maldives’ hardcore surf region. With nothing to block or refract swells, the Southern Atolls are open to swells from all southerly directions. Unlike the Central Atolls however, most of the reefs in this region face into the brunt of the swell. With closer proximity to the swells origin and less refraction, the Southern Atolls hold the most powerful surf in the Maldives. Here we’re far enough south to be into a different trade wind pattern than the rest of the country. This makes the season here short but very sweet as the southern hemisphere winter winds blow onshore at many spots. However, with plenty of scope for exploration and an abundance of swell, it’s likely there are perfect waves breaking down a remote reef most days of the year. 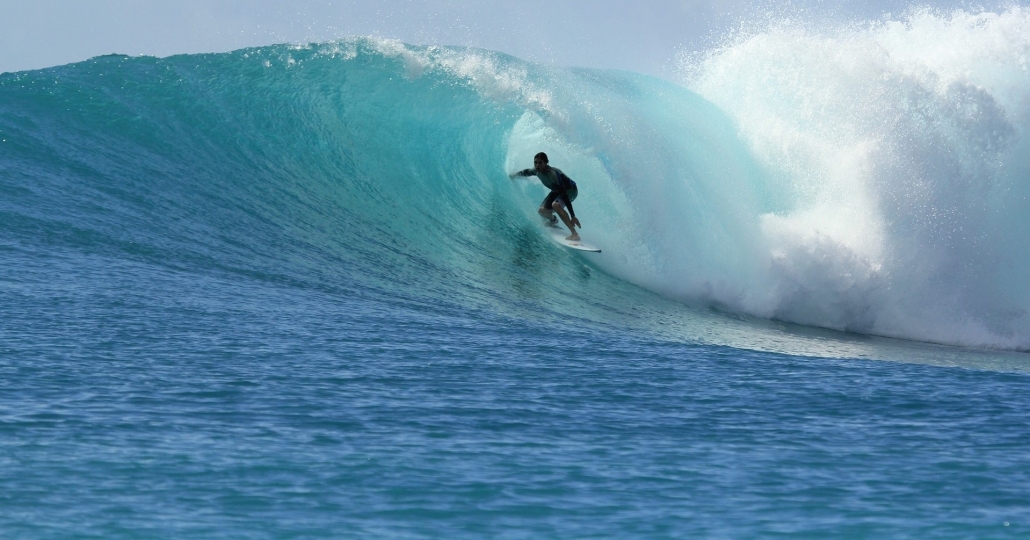 Below we’ll break down the Maldives surf season and look at how each region changes throughout the year.

The Southern Hemisphere summer is generally the time of least swell activity in the Indian Ocean. However, maximum swell exposure and breaks offshore in the short lived NE trades means the Southern Atolls can pump regardless. Seasonal data shows consistent long and mid period swells in the 4 foot range. Plenty to keep things interesting on the exposed reef passes. This is the time to visit the Southern Atolls for guaranteed good conditions. It’s not unlikely that you can score the waves of your life with no other boats around!

The Central Atolls can also see some classic days at this time of year despite being the ‘off season’. However, with swells having to travel further, it’s only the more powerful pulses that will make it up here.

We don’t recommend surfing in the Malé Atolls at this time of year. The SE trade winds are not yet producing swell and the wind is onshore at most spots. If you want to surf the Maldives at this time, head South!

For those in the know, shoulder season can be a fantastic for surf all over the Maldives.

The Indian Ocean begins producing the SE swells which light up the Malé Atolls. At these times of the year, the swell machine is warming up or cooling down. Whilst consistent, swells are normally in the ‘fun sized’ range. This makes the shoulder season a fantastic time for intermediate surfers and those not as confident in bigger waves. This period of transition between the two monsoon wind patterns causes very light or no wind on many days. If you like your surfing tropical, fun sized and glassy, check out our surf coaching trips here

The Central Atolls are also a fantastic option, with glassy conditions and a variety of spots exposed to both SE and SW swells. Loads of waves and not many people. Dreamy. We scored particularly good waves here in March 2022 – check out this video to see Renegade Coach Mark Boyd ripping.

Whilst the Southern Atolls can still have world class days at this time, the winds are beginning to come onshore. With so little land mass, the Maldives don’t experience convection winds that cause offshore mornings like many places. This makes scoring in the Southern Atolls a bit more of a lucky dip. But when you do, you certainly won’t forget it!

This is prime swell producing time in the Indian Ocean. The waves are incredibly consistent and trade winds have settled into their steady flow.

The Southern Hemisphere winter is peak Maldives surf season for both the Malé and Central Atolls. Whilst the Southern Atolls also cop the most swell at this time of year, the wind blows onshore, meaning either lucky ‘in between’ days or lesser surfed corners will be the pick.

Seasonal data shows both the Malé and Central Atolls receive consistent swells in the 5-6ft range throughout this period. This time of year is also when those big Indian Ocean bomb swells are most likely to occur. WNW trade-winds blow consistently offshore at the vast majority of spots allowing for great conditions every day. In typical fashion, this time of year is the most popular for visiting surfers. However, bigger swells light up more spots, spreading the crowd and lighting up hidden corners. We run our advanced surf coaching trips during this window as it offers the chance to score the biggest and best waves in the Maldives.

Check out some of the waves we scored in July 2021 here.

If you have any questions, would like to book a trip or just fancy a chat about anything surf related, drop us a line here.

Want to join the discussion?
Feel free to contribute!

MALDIVES SURF CHARTER VS RESORT
Scroll to top
We use cookies on our website to give you the most relevant experience by remembering your preferences and repeat visits. By clicking “Accept”, you consent to the use of ALL the cookies.
Do not sell my personal information.
Cookie SettingsAccept
Manage consent

This website uses cookies to improve your experience while you navigate through the website. Out of these, the cookies that are categorized as necessary are stored on your browser as they are essential for the working of basic functionalities of the website. We also use third-party cookies that help us analyze and understand how you use this website. These cookies will be stored in your browser only with your consent. You also have the option to opt-out of these cookies. But opting out of some of these cookies may affect your browsing experience.
Necessary Always Enabled
Necessary cookies are absolutely essential for the website to function properly. These cookies ensure basic functionalities and security features of the website, anonymously.
Functional
Functional cookies help to perform certain functionalities like sharing the content of the website on social media platforms, collect feedbacks, and other third-party features.
Performance
Performance cookies are used to understand and analyze the key performance indexes of the website which helps in delivering a better user experience for the visitors.
Analytics
Analytical cookies are used to understand how visitors interact with the website. These cookies help provide information on metrics the number of visitors, bounce rate, traffic source, etc.
Advertisement
Advertisement cookies are used to provide visitors with relevant ads and marketing campaigns. These cookies track visitors across websites and collect information to provide customized ads.
Others
Other uncategorized cookies are those that are being analyzed and have not been classified into a category as yet.
SAVE & ACCEPT
Loading Comments...